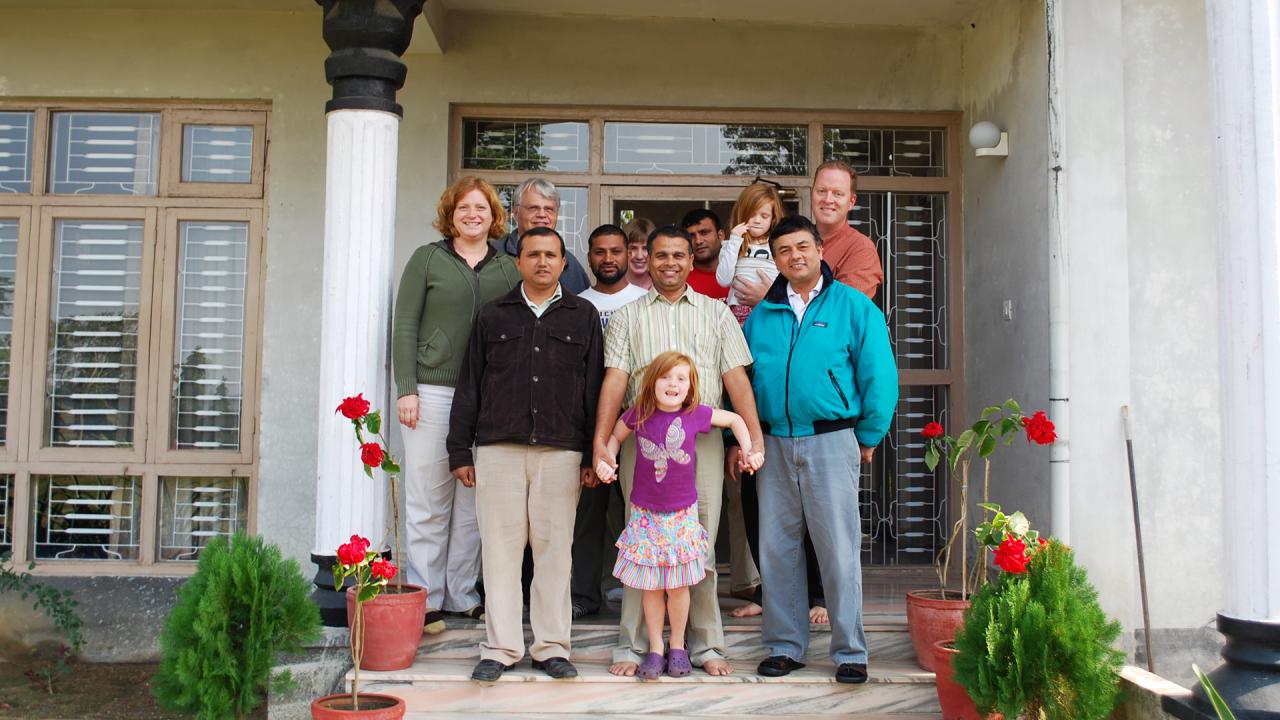 Photo. The official farewell to visiting researcher Amy Pienta and family from the Institute for Social and Environmental Research-Nepal staff in Chitwan, Nepal.

Dr. Amy Pienta’s global work focuses on the demography of aging and retirement and health in later life, including a large research project that focuses on building data infrastructure to study populations of people living with HIV throughout the world.

What is demography and how can it help improve population health?

Population health relates to the size and composition of the population such as age structure and how it changes over time. Demographers work to uncover the forces underlying demographic events and processes—including births, deaths, and migration—and their consequences using large-scale data and demographic methods to better understand impact and forecast change.

For example, the COVID-19 epidemic has had a disproportionate impact on certain demographic groups such as non-whites, and demographic models will be helpful for anticipating the lasting impact of long COVID in the population overall as well as identifying more targeted needs for health care and services.

What shifts are happening around the world in how we live that will affect health for aging populations?

Demographers have observed that demographic population shifts create population health challenges. When fertility declines, for example, and a country’s population becomes older overall, many have observed there may be less family caregiving for chronic conditions and functional limitations in later life without a rise in institutional support for caring for the aging population. Looking ahead, population health stands to be affected greatly by a number of global demographic shifts that are likely to be exacerbated by rising sea levels and climate change, uneven COVID-19 impacts, and new forces spurring legal and illegal migration patterns.

Why did you become a Center for Global Health Equity member?

My work as a social demographer looking at how family change impacts the health and well-being of older adults led to my work both in the US and Nepal. My research projects pointed to the potential to contribute to the better collection and sharing of data systematically to expand the evidence base in low-income countries. I found that this interest is consistent with the mission of the Center for Global Health Equity and decided to get involved.

Through its centers and institutes—like the Center for Global Health Equity, the Michigan Institute for Data Science (MIDAS), the Institute for Social Research (ISR), and many others—the University of Michigan has made numerous investments and gathered many thought leaders to work on the challenge of better leveraging large-scale data to solve social problems around the globe. I can think of no better place than the University of Michigan to advance the pursuit of research excellence globally by developing methods and infrastructure that lead to better and more open social science data for pressing global questions.

Amy Pienta is a research scientist at the Inter-University Consortium for Political and Social Research (ICPSR) and a research affiliate in the Center on the Demography of Aging (MiCDA) and the Population Studies Center (PSC) at the University of Michigan. At ICPSR, she oversees collection development and directs several large data archiving projects. Pienta has studied women’s retirement behavior, the joint retirement behavior of married couples, and the relationship between various social statuses and health.

Pienta directs the National Addiction and HIV Data Archive Program funded by the National Institute on Drug Abuse (NIDA) and the Archive of Disability Data to Enable Policy research funded by the National Institutes of Health (NIH). She is leading a new project with the Millennium Challenge Corporation (MCC) to create an MCC Evidence Platform that will encourage broad use of MCC's vast library of evidence, including survey and evaluation data collected in low-income countries.